Victoria must build 3,000 public and community housing properties—the equivalent of a new Whittlesea—each year for the next decade to tackle the state’s out-of-control social housing waiting list. 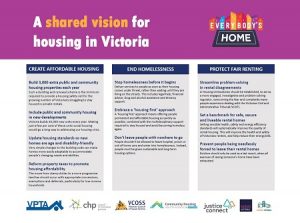 More than 82,000 Victorians are currently waiting to be housed in public or community housing. Unless the government takes action, many have no hope of getting off the waiting list and into a home.

An alliance of housing and homelessness bodies, charities and social service organisations have today united to sign The Whittlesea Declaration; calling on the Victorian Government to build the equivalent of at least ‘one new Whittlesea’ each year to stop the list blowing out further.

“Victoria needs an ambitious social housing building program to provide a roof to those most in need,” the alliance says.

“Thousands of people are languishing on the streets, in rooming houses, in overcrowded flats or on friends’ couches. It is simply not good enough.”

Victoria has the lowest rate of social housing in Australia with just 3.5% of dwellings being social housing. This is despite greater Melbourne boasting nearly 200 hectares of government-owned land that could host 30,000 homes, according to University of Melbourne researchers.

The Victorian Government’s own infrastructure advisory body, Infrastructure Victoria, has described the delivery of 30,000 new affordable dwellings over the next decade as “an achievable and significant response” to the state’s housing crisis.

The alliance is also urging the Victorian Government to:

“Homelessness doesn’t happen by accident; it is a direct result of a lack of housing for people on low incomes. Housing and homelessness are two sides of the same political coin. Until we see major investment in social housing, homelessness will continue to rise.”

“Giving somebody a safe, secure and affordable home is the best weapon we have in the fight against poverty. Having a roof over your head helps you overcome all the other challenges in your life. An urgent escalation in the provision of social housing must be a top priority for Victoria.”

“The community housing sector is well-placed to partner with government and industry on the delivery of high quality, affordable housing, at a significantly lower cost than the private sector, to maximise the outcomes for those in need.”

“Family violence is the biggest driver of homelessness in Australia. More than one third of women who access homelessness services are doing so because they are escaping family violence. A lack of affordable housing is one of the key reasons behind why women are having to choose between homelessness or returning to the perpetrators of violence.”

“At Justice Connect, we see people who have been left behind by the justice system, including people experiencing or at risk of homelessness. All too often their problems are connected to family violence, elder abuse, financial exploitation, mental health and more. Providing safe and affordable housing is a fundamental step in giving people a fair chance at a better life.”

“Recent changes to tenancy law are welcome but we also need a robust supply of social housing as an alternative for low-income households for whom the private rental market remains insecure and unaffordable. Only stable and affordable social housing will enhance social and economic participation for these vulnerable Victorians.