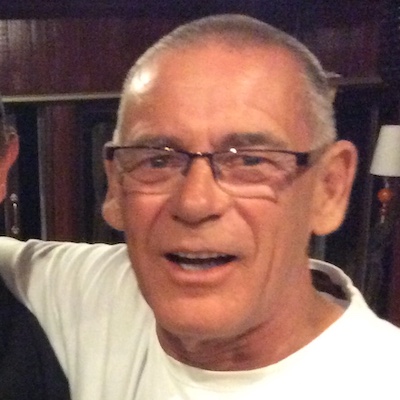 This story is part of the My Corona series. We’re publishing personal stories about the pandemic, life in isolation and Victorians’ hopes and fears for the future. We have changed Andrew’s surname at his request.

The first I knew about it was 4:30pm on Saturday. I got a phone call from a friend wanting to know where I was.

“Do you know you’re in hard lockdown?” he replied.

So I went downstairs and there were coppers everywhere, looked like Critical Incident Response police. I realised, hang on, this doesn’t look good.

I wanted to get my laptop out of my car and a copper threatened me with a fine. In the end he relented, but he followed me to the car and followed me back.

There was no degree of compassion. I mean, there’s no way I could have got into the car and driven away. It was blatantly obvious I had no personal belongings with me, just my keys. I just wanted to get my laptop.

I found out more on the news that night: hard lockdown, you’re not going anywhere. It was very confronting.

I had enough food to get me through for five days. I was probably going to be a bit dicey on vegetables, but I could have lived without them. But I was actually quite worried that it would be extended beyond the five days.

There was a total lack of communication, nobody seemed to know what was going on.

Not even the Salvation Army, who have an office downstairs, were allowed into the building. You couldn’t even go down into the foyer and speak to the them while maintaining a social distance.

I’d been tested for COVID-19 the week before and had the negative result on my phone, which I showed the police. It had come through on the Thursday and I’d been home all day Friday. All I’d done is go to the supermarket on Saturday morning, wearing a face mask the whole time.

But there was this massive overreaction with coppers.  It was contemptuous treatment, a total mistrust.

There was no food delivered until the Monday. I would say a lot of people use shopping as their daily exercise, so they would shop on a daily basis. I wonder how many people had nothing until Monday.

On the Monday we got a box from Foodbank. Most of the stuff was out of date so I just threw it down the rubbish chute.

And then we got a load from Woolworths, a load from Coles and a load from The Smith Family. It was actually overkill because the majority of people in this block are single occupants.

At one stage I ended up with nine litres of milk. Bloody ridiculous.

It was contemptuous treatment, a total mistrust.

There was no knock on the door to tell you when food was delivered. You’d see people walking past through the window and you’d open the door and the stuff would just be there.

There was no communication about testing, they’d just come to your unit. I had them stick it up my snout and out the back of my brain, down my throat, and that was it. It was done on the Tuesday and I got the result on the Thursday. Negative.

The bit that hurt me the most was I couldn’t see my grandchildren.  But I became resigned to it. I thought; Five days, I’ve got to cop this.

About 4pm Friday, word spread that the lockdown was finally over. I went down at 4:30pm, but the cops said, “No, you can’t go out until the morning.”

That was a kick in the guts.

I had a birthday present for my granddaughter, Elena.

It hurt because I felt like an absolute ratbag for not being able to give her the present and a hug on the day. I don’t think any grandparent would feel any differently.

Andrew was interviewed remotely by Seven News on the second day of lockdown.

When I got up the next morning, Saturday, the first thing I did was look down. No coppers. I was allowed out.

It felt bloody beautiful, I can tell you. The weather didn’t matter—you were free!

To a certain extent, it felt like incarceration. You’re locked up though you’ve done nothing wrong.

I’m lucky, I’ve got family who would have delivered stuff (if they could), but there are a lot of people who’ve got no one. I was also lucky that I had enough medication to get me through.

The other thing is there’s people with mental health issues, how did they cope? At least I’ve got a phone. The bloke in the unit next door to me hasn’t got a phone, he’s got no contact with the outside world.

We were treated as second class citizens because we’re in public housing. If I’d been in a private high-rise block, there is no way known they could have got away with it. They would have had lawyers jumping all over them.

If I’d been in a private high-rise block, there’s no way known they could have got away with it. They would have had lawyers jumping all over them.

The week was like nothing I’ve ever experienced. I was angry but I understood, to a certain extent.

But I still think that it could have been handled a lot better.

I think it was done in a very arbitrary way and without any form of compassion. It was humiliating.

If the government have to do a hard lockdown again they should knock on every door, actually tell people what’s happening, give them half an hour’s notice.

I’m not blaming the police (except for that first one). They acted with great respect.

But I must admit, every morning when I get up I still look out to see if there’s coppers downstairs again.

I’ve got no trust. Simple as that. And we’re still now allowed to move around freely, without any restrictions.

When we had SARS, you knew it would come to an end.

We had the global financial crisis; but you could see there was going to be an end to it.

But this? You can’t see an end.

Andrew Carman, 67, was confined to his one bedroom unit in North Melbourne for five days during the Victorian Government’s ‘hard lockdown’ of nine public housing towers in July 2020.

This piece is derived from an extensive phone interview with Andrew conducted by VCOSS shortly after the lockdown ended.