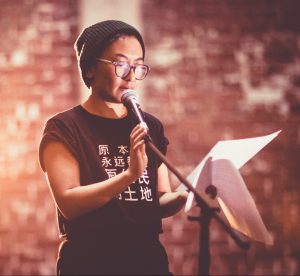 This story is part of the My Corona series. We’re publishing personal stories about the pandemic, life in isolation and Victorians’ hopes and fears for the future.

This is not your typical unemployment story. My experience is a little unusual. But maybe that’s precisely the point: the COVID-19 response from both state and federal governments makes certain assumptions about how we work, and a lot of us just don’t work that way.

I’m a writer. But often writing doesn’t really pay, or rather, the type of writing that’s worth doing tends to pay poorly, slowly, and irregularly, if at all.

Writing is both a vocation and a profession but it’s often not a job in a recognisable way. You cobble together a living out of various odds and ends while trying to build a career, and if there happens to be overlap between your life’s work and the things you get paid for, then you consider yourself lucky.

I’ve been lucky. Over the last decade, I’ve had jobs ranging from call centre operator to head of news at a well-regarded international media outlet. I’ve also drawn freelance income from writing, editing, public speaking, performing, radio and podcast making, producing events, transcribing, and proofreading. And I’ve done a lot of unpaid work in arts and activism, both for myself and for the world I want. I’m used to keeping lots of plates spinning.

Before the pandemic properly hit Australia, I was working at an online media outlet as a writer and editor on a fixed-term contract. I left that job in early March to become a full-time freelancer.

A week later, the country went into lockdown.

I was terrified. I was supposed to be building my freelance business but instead it seemed like the entire industry was collapsing. Plus, maybe the world was ending. I kept seeing petitions calling for more government support for the arts, which I dutifully signed, but it felt like holding a placard in a tornado. I was reeling from shock and glued to the news, too struck with grief and uncertainty to apply for any of the grants or relief funds that started to pop up. I also didn’t know how to answer the question of how much income I’d lost because I’d only just started.

But I was still writing, still pitching, still numbly hustling away. There were the weeks where everyone only wanted COVID-related content, and then suddenly everyone wanted to read about something else. I struggled to come up with ideas; almost everything seemed in poor taste for this crisis.

When I did get work, it was beset by all the predictable freelance problems: by mid-May, I was still waiting on payment for work completed in March. For some commissions, I spent more time chasing payment and wrangling paperwork than I’d spent doing (and being paid for) the work itself.

As a freelancer, I usually have few rights and no leverage to negotiate, though salaried staff aren’t necessarily faring much better – a few of my articles are stuck in limbo because the companies are going through layoffs.

It seemed like I’d chosen a terrible time to leave my job, but there were also benefits to joining the teeming ranks of the unemployed during a global pandemic.

So many mutual aid groups sprang up. Newspapers that are ordinarily devoted to vilifying welfare recipients softened their stance.

The Federal Government doubled the payment that jobseekers receive.

On the one hand, it made me feel sick to see how politicians and media commentators divided up the ‘deserving’ and ‘undeserving’ poor, but on the other, it showed me what a critical mass can achieve. What a testament to the power of the collective!

It only took a pandemic for people to see that social security is just as its name implies – an essential feature of a safe and healthy society.

It only took a pandemic for people to see that social security is just as its name implies – an essential feature of a safe and healthy society.

Eventually, I managed to access unemployment benefits, which I probably wouldn’t have been eligible for under the normal rules. It was still a frustrating process – no one would advise me on whether I was supposed to apply for JobSeeker or JobKeeper, and most of the available information didn’t make sense for sole traders – but overall it seemed less punitive and humiliating than the usual Centrelink experience.

I was already a union member with the Media, Entertainment and Arts Alliance – which suspended fees for members who requested it – and in March I also joined the Australian Unemployed Workers’ Union.

It feels like there’s an opportunity now to turn some of the lessons of the pandemic into real change.

So much of the emergency response from state and federal governments seems to misunderstand the ongoing precarity that many of us are in.

Writers are far from the only ones for whom the pandemic just pours fuel onto the pre-existing problems of capitalism today, but the crisis has made it very obvious just how unsustainable the arts and media industries are, even as people consume more news, music, television and film than ever.

As Jacinda Woodhead – then editor of long-running literary journal Overland – wrote last year, the Australia Council for the Arts funding system fosters a “disposable arts culture” focused on the new and shiny. As a result, artists are in a constant state of precarity and crisis.

That means that for many of us, there’s nothing to return to, nothing to recover. The status quo is already broken. It’s an empty bowl – with a smear of racism, sexism and ableism to boot.

“The arts community, then, continues on in a state of unending precarity. But a consequence of this tenuousness is a refusal to reckon with its decades-long reliance on government subsidies, philanthropic donations and corporate sponsorship. […] Is it any wonder that when some of us hear the phrase ‘art sector’ combined with ‘unprecedented times’, we find ourselves without the capacity or the belief or the will or the desire to invest whole-heartedly in ‘saving’ it?”

It feels like a cliché at this point to say that a reckoning is long overdue, but it’s true.

The way things were – it wasn’t working.

I’m not sure I have anything cogent and concise to say about my hopes for the months ahead, because I can only whisper, naively, sheepishly: What if we never go back?

Jinghua Qian is a writer, critic and commentator often found thinking about race, resistance, art, desire, queerness and the Chinese diaspora. Born in Shanghai, Jinghua now lives and works in Melbourne, on the land of the Kulin nations.