This story is part of our My Corona series: personal stories about the pandemic, life in isolation and Victorians’ hopes and fears for the future.

In the early days of COVID-19, when uncertainty was high, I had just emerged from a depressive episode triggered by racism in my daily life.

With COVID restrictions setting in and the public demanding a scapegoat, I started seeing headlines about a “Chinese virus”.

I had to stop reading the news to preserve my sanity – but the news seeped into my life. My feed was full of reports about vicious verbal and physical attacks against people who “looked Chinese” all over the world. Iconic Asian businesses were shutting down. I was terrified of accidentally sneezing on public transport even though I was healthy and practising social distancing. I saw white people sneezing and coughing liberally, not covering their faces. I knew they would never understand the fear and pressure I felt.

I live on a street that’s majority white. It was hard not to feel put on the spot when I saw “Yellow Peril” spray-painted on my local bus stop.

Experiences of racism, of feeling helpless and belittled, are triggers for my borderline personality disorder (BPD) symptoms.

BPD is a chronic mental health condition characterised by an unstable sense of self, an extreme fear of abandonment, rapidly changing and intense moods, and impulsivity. It has been likened to having no emotional skin, such that the slightest sense of loss, rejection, frustration, confusion, anger, grief, or shame feels like a third-degree burn.

Behaviour commonly associated with this condition can include suicide attempts or threats, drug and alcohol problems, gambling, excessive spending, explosive tantrums, and other impulsive behaviours. Not all BPD sufferers engage in all of these behaviours, and this isn’t necessarily how the condition manifests in my own life. Nevertheless, these and related behaviours may seem shocking and irrational to an outsider – until you consider that people with BPD are just trying to escape what feels like a house on fire.

It had taken a long time to get my BPD diagnosis, alongside diagnoses of generalised anxiety, depression and PTSD. It had taken my partner begging me to see a therapist – another therapist, as I had tried many in the past, always with the same results: a few moments of hope followed by weeks of despair, defensiveness, feelings of betrayal and being misunderstood.

My new therapist Gaia (not her real name) was different. A beautiful, educated woman my age. We shared similar values. Her eyes were the colour of high-end chocolate. Her room smelled like cinnamon.

I started to feel safe. Safe enough to be present in, and accepting of, my imperfect self. I started to share pieces of me I’d never shared with therapists before. For the first time in my life, I felt ready to seek out a diagnosis.

BPD has a bad rap amongst health professionals and the public: a condition with a poor prognosis, patients regarded as hopeless causes. Media coverage has not helped, with a tendency to focus only on the most extreme cases, and only recently bothering to incorporate the perspectives of those who live with the condition every day.

Effective treatments have only emerged in the last 20 years. Much work has yet to be done to develop best practices for queer folks and people of colour, whose emotional triggers and vulnerabilities are different to normative research assumptions.

As the COVID situation continued, the triggers got worse. It was upsetting to read news about how international students were being hung out to dry, told to get out of the country and too bad if they couldn’t afford it.

I’d been an international student once (on a full scholarship), and when I needed to fly to Manila after my dad died I couldn’t qualify for an emergency plane ticket loan just because I was an international student, even though I could pay back the money in full with my next scholarship instalment 14 days later. An unplanned, unpredictable emergency like my dad’s sudden death, like COVID-19, messes not only with your finances, but your mental health.

An unplanned, unpredictable emergency like my dad’s sudden death, like COVID-19, messes not only with your finances, but your mental health.

Losing sessional higher-education contracts dealt another blow to my well-being. One university honoured their contract and paid me to do the work I had committed to. The others just said, “Don’t come in.”

Being able to contribute financially is important for me, having survived financial abuse in the past. I’m fortunate that my partner still has his job and is 100% supportive of me. Still, the whole situation triggered emotional memories of being utterly dependent with no escape.

Then George Floyd was brutally murdered. There was the sudden and extreme increase in media attention on the ongoing historical injustice of police violence against black people everywhere and First Nations communities in Australia.

I saw how essential it was to do racial justice community-work and self-work every day – even in a small way, even in my own way. Anything done with an open heart and a willingness to grow and adapt to criticism was better than the quietism and apathy that had allowed so much suffering to go on unquestioned.

I almost didn’t go to the Bla(c)k Lives Matter protest. I was emotionally spent and did not want to risk falling ill or having a panic attack in a crowd. But as I was getting my takeaway brekky in my mostly white inner suburb, I saw white people going about smiling, laughing, making plans, like their world had not changed.

Like George Floyd, Breonna Taylor, Ahmaud Arbery, Tanya Day, David Dungay and so many more had not been taken from their loved ones too soon, their lives lost to white supremacy and indifference.

The white dads with their prams ran their eyes up and down my body like my only value to the world was eye candy for wealthy men. I felt myself panic. The hot flashes. The ticking fingers. The clicking jaw. The boiling rage. The sensation in my belly that said, “You’re not safe here. You were never safe here.” I had to get away.

An hour later, I was standing outside Parliament House in a mask and gloves.

Around me were masked people of all ethnic backgrounds and genders, many of them my age. 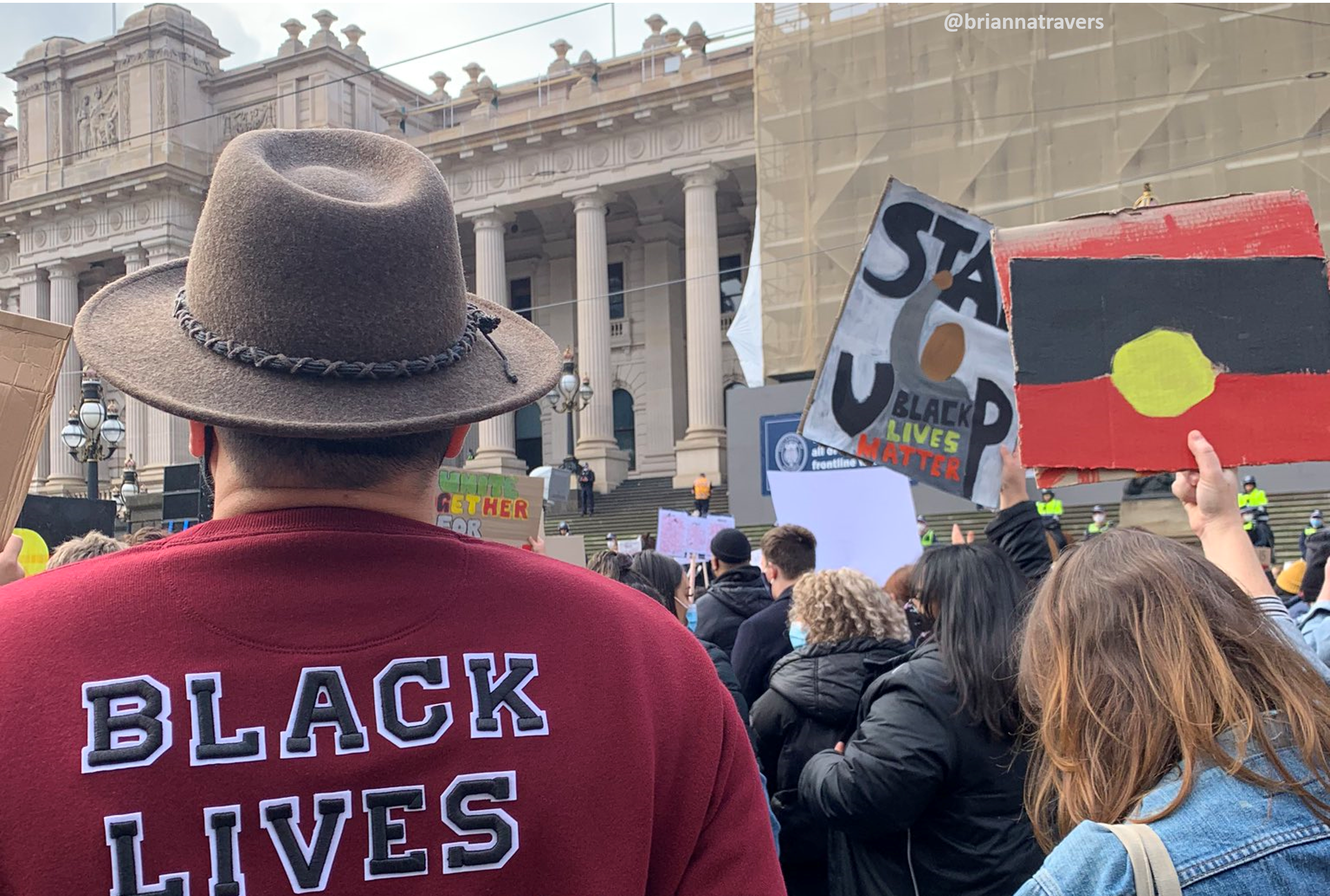 There were many first-time protesters too. I was getting texts from white friends who had never been to a rally before but wanted to go. I saw social media notifications from people sharing racial justice posts even if they’d never been openly political before.

Thousands of masked faces on the street in the middle of a pandemic, thousands of voices chanting, “bla(c)k lives matter.”

May it be a moment that leads to enduring transformation for our country’s most vulnerable people. Aboriginal activists have led the march for years, and most of us are late to the front line.

One of my symptoms is to only feel in control when I’m dictating the terms of engagement.

That day, in the middle of a pandemic, I felt safe in my rightful place as a supporting act, a bricklayer and cheerleader in the grand design of a hopefully fairer future.

Angelita Biscotti is a queer Filipinx Melbourne artistic storyteller whose work has appeared in many respected Australian publications. She was a 2017 Hot Desk Fellow at the Wheeler Centre, and is a Fellow in the 2020 Create Change Fellowship, a project delivered in partnership with Democracy in Colour and cohealth.