By Brendan Coates of the Grattan Institute.

There’s no doubt Australia’s construction industry is facing tough times. COVID-19 has caused migration to slow to a trickle. Some 2.6 million Australians have either lost their jobs or had their hours cut in the past two months. Many economists expect property prices to fall.

It all adds up to fewer homes being built in the coming months. That means fewer jobs in the construction industry, which employs nearly one in 10 Australians. The sector has already lost nearly 7% of its workforce since March.

The Morrison Government is set to anounce a stimulus package for the construction sector as soon as this week. But what should it include?

More home-buyer grants on the way

The federal government has signalled it will offer cash grants of at least A$20,000 to buyers of newly built homes. Unlike past schemes that have targeted first home buyers, it seems these new grants will be available to everyone including upsizers and investors. Grants may also be extended to renovations.

Large handouts would prompt some more residential construction by encouraging some people to bring forward their home purchases. It’s why in 2008 the Rudd government tripled the first home buyer grant to A$21,000 for new homes in response to the Global Financial Crisis.

But under such schemes, governments also end up giving grants to people who would have bought a home anyway. Even the more pessimistic industry forecasts expect 110,000 homes to be built in Australia next year. Giving A$20,000 to all of these home buyers would cost A$2.2 billion without adding a single construction job. Grants of A$40,000 would double the bill.

That’s a lot of spending for little economic gain.

Nor do grants to home buyers actually make housing more affordable. They are typically passed through into higher house prices, which benefits sellers more than buyers. In this case, that is likely to include developers eager to clear their existing stock of both newly and nearly built homes.

Cash grants for renovations would likely hit the economy quicker since they don’t necessarily require building approvals. But they bring their own problems. Grants will likely see in-demand tradies raise their prices, especially if the government is effectively paying for most of the work done. It will be also be harder for officials administering the scheme to determine if the work has been done before paying out the money.

Nor is it clear the renovation sector needs further stimulus: reports suggest COVID-19 is driving a renovation boom across many parts of Australia. Research by credit bureau Illion and economic consultancy AlphaBeta shows spending on home improvements is already 33% higher than pre-COVID levels.

There’s a better way to support residential construction without providing such big windfalls to developers: fund the building of more social housing.

Social housing – where rents are typically capped at no more than 30% of household income – provides a safety net to vulnerable Australians.

In particular, the Morrison government should repeat another GFC-era policy, the Social Housing Initiative, under which 19,500 social housing units were built and another 80,000 refurbished over two years, at a cost of A$5.2 billion.

Public residential construction approvals spiked within months of the announcement. 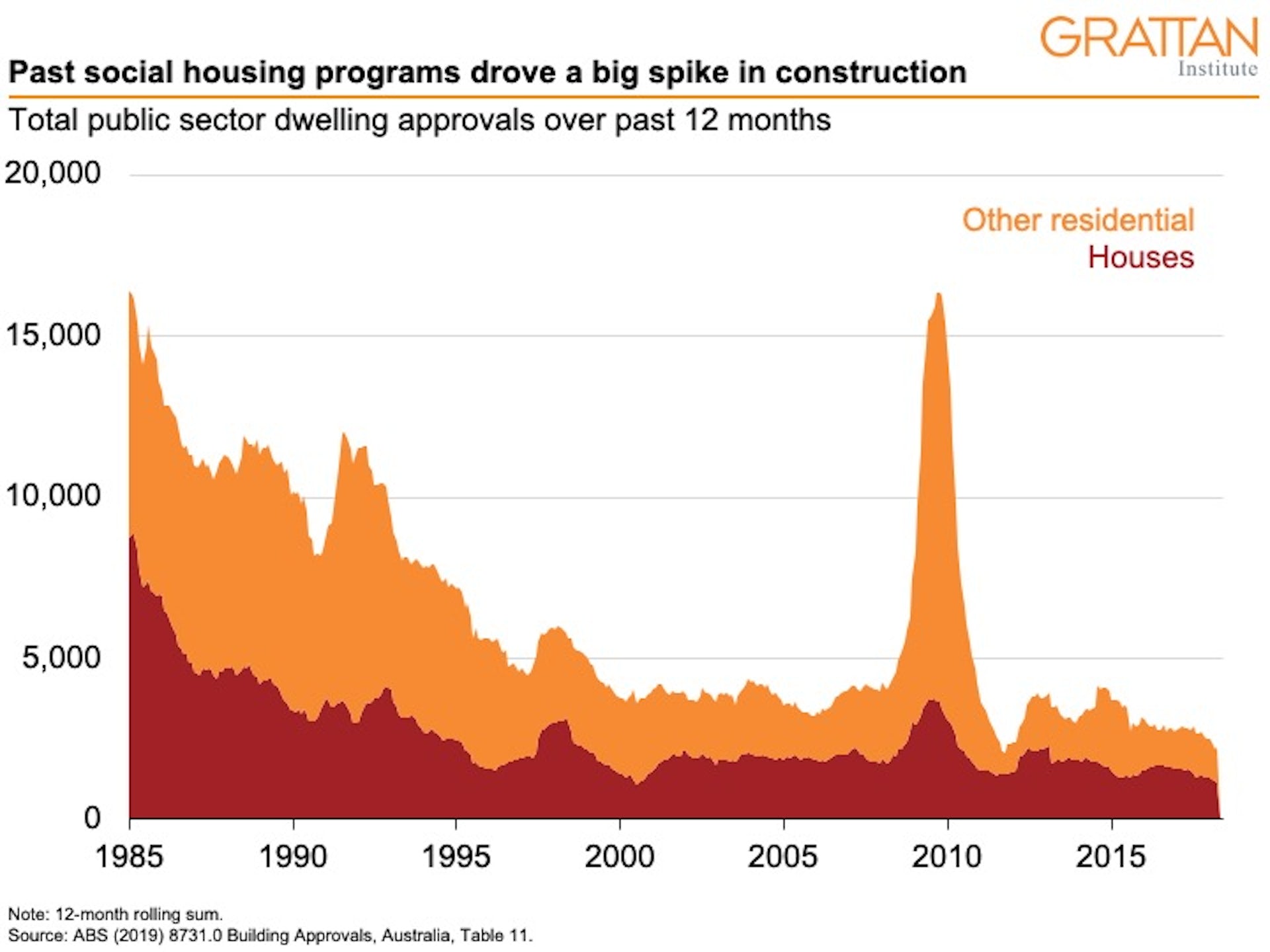 Building 30,000 new social housing units today would cost between A$10 billion an A$15 billion. Because state governments and community housing providers won’t have to worry about finance, marketing and sales, they’ll be able to get to work building homes much quicker than the private sector.

The boost to the economy would be pretty immediate.

Just as important, building social housing would also help tackle the growing scourge of homelessness. At the most recent Census (2016), more than 116,000 people were homeless, up from 90,000 a decade earlier. COVID-19 has shown us that if we let people live in unhealthy conditions it can help spread disease – affecting everybody’s health.

Funding social housing won’t boost house prices or provide windfalls for developers. It will do more to keep construction workers on the job, while also helping some of our most vulnerable Australians.

Brendan Coates is the Program Director, Household Finances, at the Grattan Institute

This article is republished from The Conversation under a Creative Commons license.

You can read theoriginal article here.