While last year’s budget delivered significant housing investment, this is not yet producing growth in social housing. The Budget forecasts a worrying decline of 208 social housing dwellings next financial year, a net reduction of $8.2 million in spending on housing assistance.

While last year’s budget announced $469 million in new capital expenditure projects in public housing, the figure fell to $173 million in this Budget. VCOSS has called on the Victorian Government to deliver a social housing pipeline to provide growth of 30,000 homes over the next decade.

While housing affordability requires a joint state and Australian government effort, VCOSS will be looking for more announcements in the lead-up to the state election in November on social and affordable housing and support for people experiencing homelessness.

This is critical given the significant increase in homelessness and housing stress. The day before the Budget, Anglicare released its Housing Affordability Snapshot Report, showing there were zero affordable rental homes in Victoria for a single person living on Newstart. 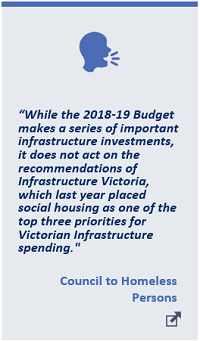