Let’s begin with what we know. By the time Australian children start school there are already measurable inequities in their health, development and wellbeing.

This is clear from the results of the 2018 Australian Early Development Census, which found nearly one in five children living in extreme disadvantaged were “developmentally vulnerable” in two or more aspects of early childhood development, compared with fewer than one in ten kids living in the most advantaged areas. The indicators include physical health and wellbeing, social competence, emotional maturity, language and cognitive skills, and communication skills and general knowledge.

Health and developmental inequities that emerge in early childhood track forward into adulthood, leading to poorer health and social outcomes.

These inequities are unjust, unnecessary and preventable.

We might think of the context in which children grow up as an ecosystem. Health and developmental inequities can be influenced from many parts of the ecosystem. They may be related to the child, the family or the broader community.

Socio-economic  disadvantage often looms largest in our thinking about what drives inequities, but there is much more to it, as shown in figure 1. 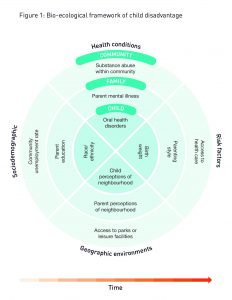 Sources of disadvantage may be related to risk factors, health conditions,  socio-demographic factors and geographic environments, all of which are affected by things like where we are born, live and work, and how old we are.

If we could level the playing field – by bringing all children to the same level of advantage – then we would more than halve the sorts of problems we see in children when they’re at school (figure 2).

In order to address inequities through effective interventions, we need a clearer understanding of what works: like when and how health, education and social care can achieve the most benefit for children.

Creating equitable system change: what can we do differently now?

Intervening early (pregnancy through to about eight years old) can have positive and sustained effects, particularly for children from disadvantaged families. Amongst the determinants that might make a difference is the big elephant in the room: the service system that’s already available.

Governments (local, state and federal) already fund a number of services for children and their families. These services – such as antenatal care, sustained nurse home visiting, early childhood education and care, parenting programs and the early years of school1 – show positive effects on specific aspects of child health and development at specific points in time.

So why the ongoing inequities in children’s outcomes?

Some studies suggest that we have an ‘inverse care’ problem, meaning that those in need of the best and most effective services actually get the opposite.

There is also the suggestion that we should be ‘stacking’ interventions in early childhood. Based on an idea from Nobel prize-winning economist James Heckman, this line of thinking focuses on ‘continuity’ (timing, duration, and quality of content) as well as ‘complementarity’ (offering different types of services for different groups).

When it comes to early childhood health and development, we should aim for a service system that delivers on quality, quantity and participation, with metrics that allow us to reliably gauge these outcomes.

However, rather than focus on the service system that exists, there is often the desire to import shiny new ideas – ‘baubles’ that seem attractive to government and community alike. From our experience we would suggest that most baubles are not evidence based, are rarely rolled out in such a way as to test fidelity and impact, and generally come at a high cost to communities, especially given the often-required need to be sustainable within three years. Yet beneath these baubles the Christmas tree is languishing. Perhaps it is time to be radically pragmatic and consider how best to effectively fertilise the Christmas tree?